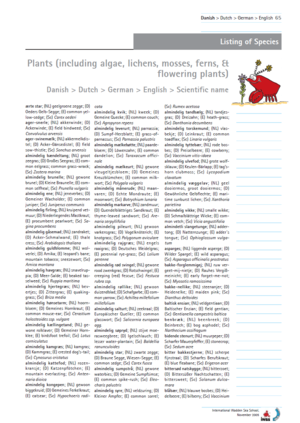 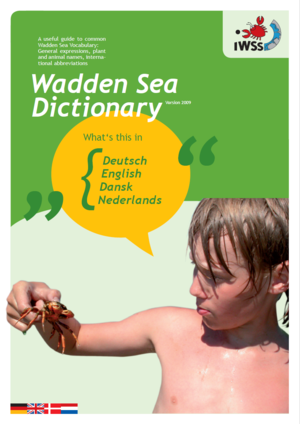 The Wadden Sea is an international nature area, shared by Denmark, Germany and The Netherlands. Since more than thirty years these countries cooperate towards a protection of their common natural and cultural heritage. With the recent nomination of the Dutch and German Wadden Sea as World Heritage Site, the area received an even worldwide recognition.

Whereas English is a common language of understanding for political, administrational and educational staff around the North Sea, the specific “Wadden Sea English” is often a challenge. How to explain ebb and flood in English? And what is the stuff called that washes ashore with all the seashells in it?

When it comes to technical terms, usual dictionaries often fail. Even more difficult to handle are species´ vernacular names. So far, no easily accessible dictionary revealed that oyster-catcher, Austernfischer, strand- skade and scholekster describe the same typical bird species everybody can see at the Wadden Sea coast.

The IWSS collected and compiled Wadden Sea vocabulary and published in 2005 this “Wadden Sea Dictionary”, a collection of words and terms related to geography, biology, ecology and nature conservation in the Wadden Sea. Furthermore the dictionary presents species names of many coastal animals and plants.

The second edition from 2009 contains some corrections and is rearranged in one complete alphabetical list, comprising both technical terms and species names.

However, even the second edition of the “Wadden Sea Dictionary” is certainly not complete.

IWSS always welcomes suggestions of further terms to be added to the vocabulary.

For contributions to the first and second edition and for corrections the IWSS is most grateful to:

Back to the top
Retrieved from "https://termhotel.com/w/index.php?title=Wadden_Sea_Dictionary_-_German,_English,_Danish,_Dutch_(International_Wadden_Sea_School,_IWSS)&oldid=7642"
Categories: